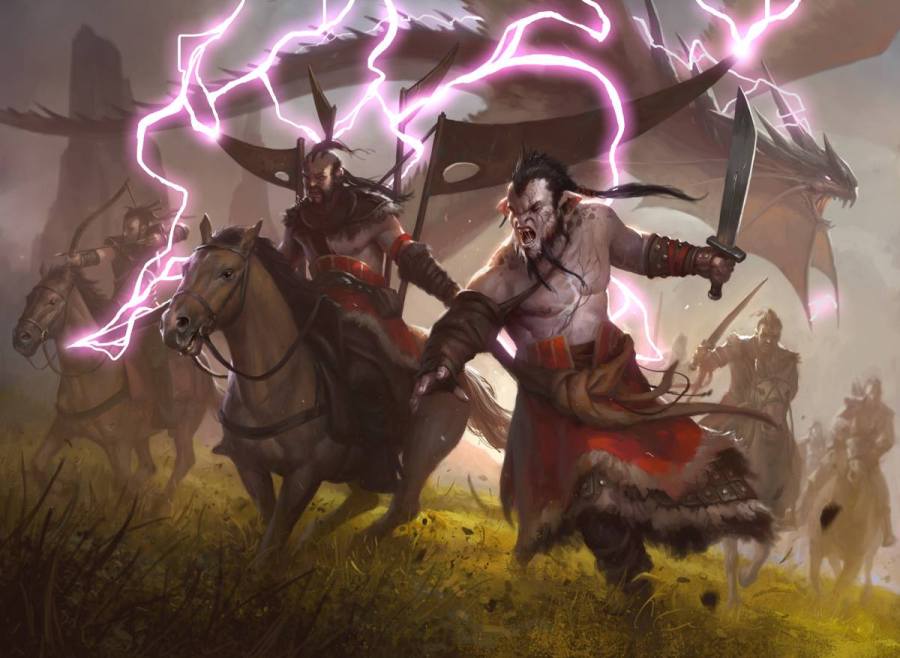 Sideboarding is one of Magic‘s trickier aspects, and I don’t pretend to have it down. That’s why I’m constantly experimenting with my sideboards and my sideboarding plans, even with decks I consider myself an “expert” on.

Below, I’ll walk you through my sideboard at the time of this writing, as well as some rationale for why each card found its place in my board. This isn’t an exhaustive Death’s Shadow sideboarding guide, but it should give you a good place to start from when tuning for your own local meta (where you’ll likely want to play more than one of some of these cards).

Young Pyromancer is an incredibly versatile card that you can bring in for a variety of match-ups. Peezy’s here primarily to act as an extra threat and value engine vs. other midrange decks (and shore up Shadow’s weakness to Liliana of the Veil), but you can also use it to:

On multiple occasions, I’ve found myself siding Young Pyromancer in for every sideboarded game I’ve played in an evening (which is what led me to try this incredibly dumb version of Death’s Shadow). I would not suggest bringing Young Peezy in against combo decks, however, as you’re looking to kill those opponents quickly in one or two shots, not chip in for two to four damage a turn.

Hazoret, on the other hand, is here only to stymie other midrange decks (Jund, other Death’s Shadow decks, etc.). Hazoret should come in if you expect to expend the resources in your hand as part of an attrition war, though beware depending on her against decks packing Path to Exile.

As far as what to take out if you’re bringing Hazoret in, I’d suggest cutting a Gurmag Angler or Tasigur if you expect the opposing deck to run graveyard hate post-board. Otherwise, you could look to replace a Street Wraith or discard spell with Hazoret, as those cards lose value against other midrange decks.

I play three copies of Stubborn Denial in my main deck, and I like having access to the fourth copy via my sideboard. Stubborn helps you counter combo decks long enough to kill them (though remember, you still need to apply pressure), and it also adds a percentage point or two against decks where you need to counter an early Chalice of the Void (although if you’re bringing it in, Stubborn should have more to hit than just Chalice). Stubborn can also help counter the removal spells that control decks are attempting to send at your early creatures (though it will never ever counter Supreme Verdict and you’ll cry every time your opponent casts one while you have Stubborn in hand).

A good rule of thumb is, if you’re taking Fatal Pushes and/or Terminates out of your deck, you should give a thought to bringing in the fourth Stubborn. 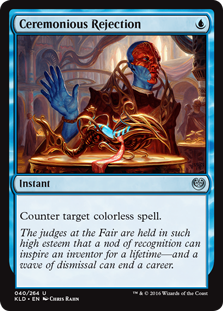 Note, however, that this card isn’t going to automatically get the job done against the Eldrazi decks mentioned above, as those decks tend to play Cavern of Souls to make their creatures uncounterable. Still, you should be able to find a window to get some value out of your Ceremonious Rejections. If your meta is heavy on the decks listed above, it might be worth running two or three of these. 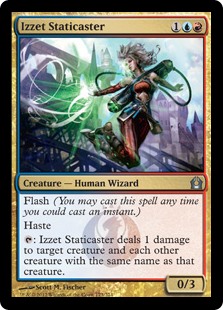 Izzet Staticaster is very good at killing X/1s, which makes it great against:

Additionally, Staticaster kills Bloodghasts over and over again, so there’s some consideration to bringing it in against decks packing the Vampire Spirit, depending on how your sideboard is configured against graveyard recursion decks. Lastly, if your meta’s UX control decks depend on finishers like Secure the Wastes, Elspeth, Sun’s Champion, or Vendilion Clique, you might want to consider bringing Staticaster in against them as well (again, depending on your overall configuration and plan).

Abrade is almost as flexible as Rakdos Charm. It carries its weight against both aggro decks and artifact decks, some of which overlap. If your opponent is playing a lot of small creatures quickly (*cough*Humans*cough*) or depending on artifacts to fuel a combo (KCI), Abrade is where you want to be, and I can’t imagine that running one won’t serve you well. 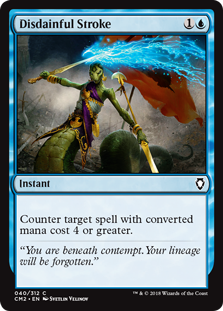 Disdainful Stroke’s been a little less useful than normal lately, but it still gets there against:

It also has other niche uses, such as being able to counter Gurmag Anglers and Hollow Ones (though our sideboard also has better answers for those cards). If you’re seeing a lot of big mana decks in your meta, Stroke should be useful to you. It’s good when it’s good, and it’s horrible when it’s not. 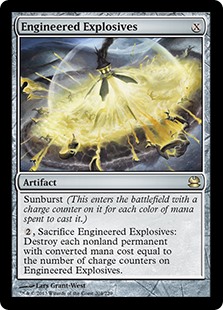 On the other side of the sideboard spectrum, Engineered Explosives is just a generally good card and a solid out against all sorts of decks and weird scenarios. Being able to set Explosives to two or three and then pop it should help you out immensely against Humans (provided you’re not already dead), and EE is Shadow’s only defense against the GW Hexproof deck if they’ve managed to suit up a creature. Just make sure you think ahead when you set the number of charge counters on your EE, especially if you’ve brought Young Pyromancer in as well. It’s never fun to awkwardly destroy your own threats when you could’ve played around that scenario. 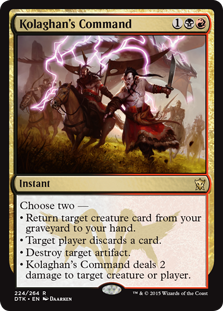 If you own one, you might be tempted to play either a Liliana of the Veil or Liliana, the Last Hope over this third copy of Kolaghan’s Command. I don’t own either, so I wouldn’t know. I can, however, tell you that the third copy of Kommand is good against midrange decks, artifact decks, and decks that are attempting to stop you cold with Chalice of the Void. Between Abrade, Rakdos Charm, and this additional copy of Kommand, our sideboard has a lot of game against Chalice without sacrificing very much, as each of those cards has a variety of other uses.

Kolaghan’s Command is also useful against Sorcery-speed combo decks (like TitanShift) and Tron decks, against which you can run Kommands back-to-back (via Snapcaster Mages) during their draw step to strip a card they’ve just drawn and buy yourself a couple precious turns. 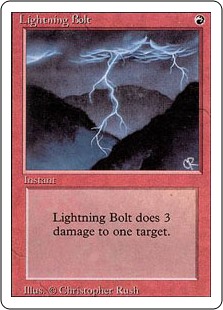 It’s Lightning Bolt. It’s the second-best Magic card. You should bring it in always and likely be playing it main deck (unlike me, a scrub).

Okay, I’ll elaborate a little further. Bolt slows aggressive decks down and helps provide extra reach against some control decks. If you have extra cards you want to take out against midrange (like, say, your discard spells), you could do worse than play a Lightning Bolt in your deck. Again, whether or not you have space for Lightning Bolt in post-board games might depend on your specific main deck and sideboard configuration.

I’ll be honest: I have trouble with Collective Brutality. Brutality’s obviously nuts against Burn, but from there … what do you bring it in against? I often bring it in against Collected Company decks, hoping to kill a creature and strip a Company, but often whiff or am confronted with a board of three-toughness creatures. Part of the reason I’m still running it is to try and figure out why people do so. If you have some good insight into this one, let me know. In the meantime, I’ll keep playing Brutality until I either figure out where it’s good, or just get rid of it altogether.

Dispel is a wonderful card that lets you fight against Path to Exile and other removal spells extremely efficiently. You’re likely bringing Dispel in either to streamline your deck against control (cutting your own removal spells), stop an opposing combo deck (such as Storm, where your primary target is Gifts Ungiven), or fight against extremely niche cards that are very good against Shadow (such as Collected Company).

You can also consider bringing Dispel in against other midrange decks packing a lot of Instant-speed removal (or their own Kolaghan’s Commands), although you should likely be bringing the fourth Stubborn Denial in against those decks first, as it hits more targets. 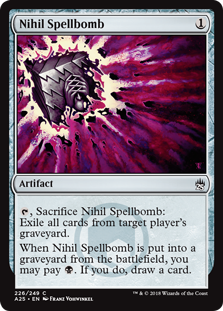 Spellbomb is my targeted graveyard hate spell of choice, although I’ve messed with a few other options (including more Rakdos Charams and Surgical Extraction) in the past. I prefer Spellbomb to other options because you can bring it in against midrange decks that use the graveyard for value, denying them resources while not dedicating a whole card to graveyard hate (since Spellbomb cycles). Spellbomb is, in a sense, a hedge that graveyard hate might not be all its cracked up to be in certain match-ups (Jund, opposing Death’s Shadow decks), though you still want the effect.

However, if your meta has a lot of completely graveyard dependent decks, such as KCI or Dredge, you might want to upgrade Spellbomb to a more dedicated hate card, such as Surgical Extraction or even, if the situation is dire enough, Leyline of the Void.

Flaying Tendrils clocks in above Anger of the Gods for me, personally, because I often need to sweep boards that contain:

If those two creatures aren’t prevalent in your meta, you might be better off playing Anger of the Gods, as the extra damage is sometimes relevant (against, say, Dredge). Either way, you’ll want to make sure your creature sweeper includes that “If a creature would die, exile it” clause at the end of its rules text, as you’ll want it to act as additional hate against Dredge and Hollow One.