Or as I like to call it, “The Even More Hipster Edition.” 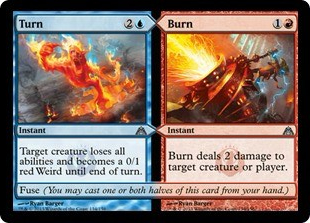 I’ve gone pretty deep in my previous U/R Delver deck techs, and not a lot has changed within my main deck since the last time we talked about it. The biggest swap I’ve made is tossing my typical main deck Mana Leaks and replacing them with Censors.

Yes, you read that right: We’re playing Censor in Modern. There are a few reasons why:

I’ve been playing Censor for a few months now, and while it’s hard to evaluate the card (because it’s never truly “dead,” even when it’s never going to counter anything), I’ve liked how it has performed. There are lots of match-ups where I side Censor out, especially after having shown them to an opponent in game one, but those are often match-ups where Mana Leak was coming out anyway.

While we’re on the topic of “cards no one else plays,” I’d like to take a second to sing the praises of Turn//Burn, a.k.a. the card all my opponents have to read.

For most of this deck’s existence, I’ve played at least six Lightning Bolt-esque effects. In the past, Lightning Bolt slots five and six have been occupied by a combination of Forked Bolt, Burst Lightning, and Pillar of Flame. When Traverse Shadow and Eldrazi Tron decks began to rise, I swapped those cards for Roast and then Turn//Burn. And I have fallen in love with Turn//Burn.

Like Censor, Turn//Burn performs a few different functions mediocrely yet reliably. The Burn mode is an inefficient Shock, but even an inefficient Shock will get there when you just want to kill a Noble Hierarch or deal the last two points of damage to an opponent.

The Turn half of Turn//Burn provides a lot more play, and gives you outs to a lot of big creatures and weird scenarios that your opponent can concoct. Notably, Turn allows you to:

I’m sure there are more incredibly niche things you can do with Turn (and that I’ve done some of them and forgotten). I’d encourage you to give the card a try and see what kind of shenanigans you can pull off with it. At the very least, it will get your brain thinking about some of the weirder interactions that can come up in Modern.

And of course, when you have access to five mana, Turn//Burn can just insta-kill most any creature in Modern. I have Turned and Burned Gurmag Anglers, Tarmogoyfs, Death’s Shadows, you name it. Just watch out for when you have to Turn//Burn a Thought-Knot Seer. The interaction between the two cards will not work out well for you (i.e. You’re not gonna draw a card when the Seer dies.).

I do think Turn//Burn is more cute than good, but I’ve always gotten at least some mileage out of it each I’ve time I’ve hit up Tuesday Night Modern. The card’s likely better than you think it is, though it’s also likely worse than I think it is.

I’ve found running fifteen “threats” in the main deck to feel about right, and the one-of Vendilion Clique has surprise-killed unsuspecting opponents at least a couple of times. All other changes I’ve made have happened in the sideboard, which has evolved thanks to new cards and a new meta:

This, then, is my current Modern U/R Delver decklist, as of this writing:

The deck’s likely not going to knock down a Grand Prix or big tournament any time soon, but I still have a ton of fun with it and usually end my Tuesday night events with more wins than losses.

I know there are other, more aggressive or just plain different builds of U/R Delver floating around out there, so let me know if you’re playing one of those, or if I happened to turn you on to either of my pet cards. As always, I’ll be back in a couple weeks. Until then, may your Delvers always blind-flip.