I had originally titled this article “Why I Don’t Play Standard,” but I think the new title sums up my reasons pretty succinctly. In case you skipped the title, I’ll reiterate:

Magic finance is itself a game, one with much higher stakes than a typical Friday Night Magic tournament. Your typical FNM costs $5 to attend and pays $20-30 worth of prizes to first place. FNMs are a casual, low-cost way to spend an evening. Buying and selling the cards you use to play at those tournaments, however, is often a hundreds-of-dollars affair.

Not everyone can handle that price point or manage the ups and downs of Magic’s secondary market. I’m invested enough to write a bi-weekly blog about the game, and even I’m thrown by Magic’s price point and the expense of cards. I am absolutely sure that Magic’s status as a “Collectible Trading” card game puts players off the game because, at a certain level, I am one of those players who is put off.

For those who might not have built a “competitive” Magic deck before, here’s a real world example of the expense and time that goes in to managing Magic on a budget. The year is 2011. I am looking to get in to Modern, so I can play tournaments with some friends. I’d very much like to upgrade and play my favorite kitchen table deck, U/R Delver.

However, to be competitive, that deck needs playsets of Scalding Tarns (price: $75 each), Steam Vents (price: $20 each), and Snapcaster Mages (price: $25 each). To say nothing of sideboard staples like Blood Moon (price: $20 each). I quickly decide that playing an optimal version of Modern U/R Delver is outside my price range. Which is fine. I can experiment and play something else. I write down the cards I need for Delver and plan to acquire them slowly through the coming years.

And I do. While I’m busy playing budget decks like Living End and Mono-Blue Tron, I manage to pick up Scalding Tarns at a semi-reasonable price ($50 each). When Snapcaster Mages rotate out of Standard, I turn my casual Allies deck, which includes a set of Flooded Groves that recently shot up in price, into four expensive Ambush Vipers. By the time 2014’s Grand Prix Minneapolis rolls around, I’ve built a functional, semi-competitive version of Modern U/R Delver. It’s still a budget deck, though. It should be, but isn’t, playing four more fetchlands. I never found the money for Misty Rainforests.

I started transforming my deck in 2011 and “finished” in 2014. That’s three years of time and effort. Three years of saving money, watching card prices, and pouncing at exactly the right time to make the most of my own collection’s increased value and dips in prices of the cards I needed. And after all that, I still had a “budget” deck.

Most gamers’ hobbies are plug ‘n play. Want to play a new video game? Buy it once and away you go. If you’re on a budget, you might wait for the game to go on sale. But unlike some Magic card prices, video game prices and sales are often predictable. The same is true for board games. Even for most Digital Collectible Card Games, Magic’s closest competitors, finance isn’t a huge issue. You can expect to spend money on those games, but there aren’t entire websites, article series, and subreddits devoted to “finance.” To managing the ups and downs of a market wholly divorced from the game itself.

But there are for Magic, because navigating the secondary market is often more complicated than navigating the Stack. Buying and selling at “the right time” requires a level of investment that I often do not have.

Which is primarily why I don’t play Standard. With non-rotating formats, I know my $200 investment in a set of fetchlands or $50 investment in a Survival of the Fittest is going to help me play Modern or Commander forever. I’ve been battling with my Scalding Tarns for nearly five years. $200 is not a bad investment for five years of enjoyment. 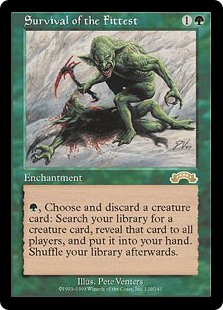 But that’s not how Standard works. Standard gives you two years (if you’re lucky) to get the most out of your incredibly expensive pieces of cardboard. Then, if you’re a person who tries to recoup their Standard investments, it’s time to sell again. For those of us with other things going on (full-time job, wife, this blog, other blogs, podcast tapings, going to the gym, other hobbies, typical life chores, etc.), managing the Standard stock market is a lot to ask. And if we’re not supposed to be managing the Standard stock market, asking us to drop $120 on a set of The Scarab God is also a lot to ask.

And that’s my point, really. I’m not just here to complain that Magic’s expensive. Other people can and have done that. I’m here to point out that Magic’s expense is a limiting factor. It prevents people from playing the game, or at least from playing the game how they would ideally want to play it. There a ton of people who simply don’t have the time or wherewithal to manage Magic finance and rotation. Those players want to play Magic: The Gathering, not Magic: The Economy.

The recently released Challenger Decks seem like they’ll help mitigate this problem for Standard specifically. I, a jaded “never play Standard” Magic player who is currently happy with both Modern and Commander, am tempted to pick up the Second Sun Control deck just to see if it’s as sweet as Return to Ravnica-era Maze’s End was. If the Challenger Decks are even minimally competitive, Wizards will have created a great, budget-optimal on-ramp to Standard.

For the non-Standard crowd, Magic: Arena’s free-to-play options should give casual players a way to battle outside their kitchen table without spending a fortune (or any money at all). I loved Magic: Duels for this exact reason, and from what I’ve seen of it, Magic: Arena should fill the Duels niche nicely.

There are also, of course, cheaper ways to play paper Magic as well. $50 Commander decks can be competitive at some local shops and at most kitchen tables. Pauper is currently flourishing and is still a budget format for now (though the secondary market has begun to take hold of certain cards there as well).

But Magic finance is a limiting factor for the game, and it’s one worth noting. After all, if it keeps an enfranchised player like me from playing Standard, imagine how many potential players it’s keeping out of Magic.

One thought on “Magic Finance Is a Hard Sell”