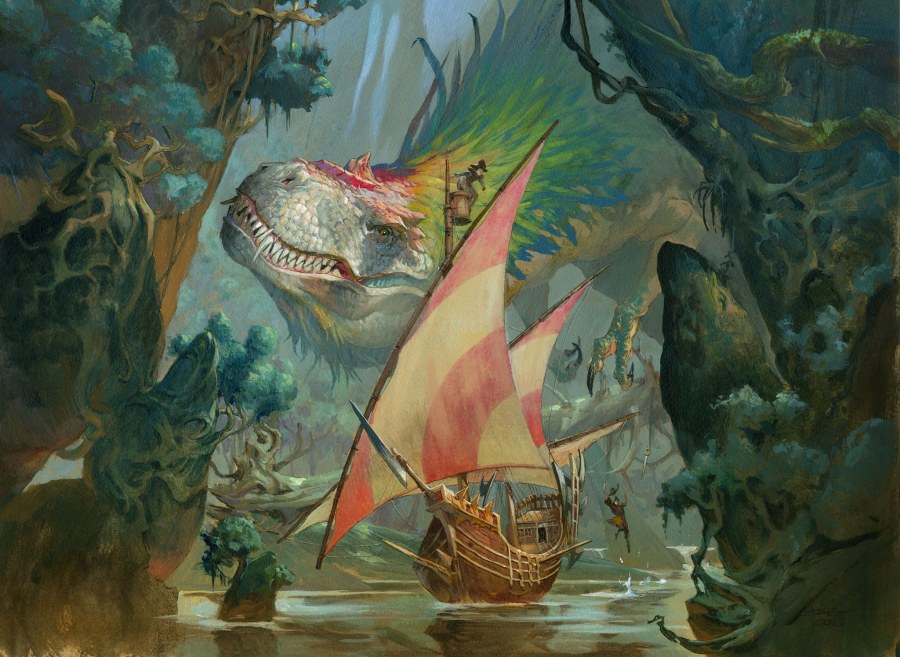 I love Ixalan‘s dinosaurs. They’re wonderful, colorful, feathery beasts that make playing Magic even more exciting than usual. I don’t know if you’ve gotten the chance to attack with a Charging Monstrosaur yet, but I assure you, it feels exactly how attacking with a dinosaur should.

Normally, I wouldn’t get to play with dinos all that much. Draft is expensive, and I don’t know if you’ve read the blog’s tagline, but Standard is right out.

That’s right, it’s time for Matt Plays Magic‘s triumphant return to Standard Pauper. And while I can’t guarantee we’ll create the most competitive deck in the format, I can guarantee we’ll build the best darn Pauper dinos deck we can.

There’re less dinos to work with at Common than I expected. Combining Gatherer search results for Common dinosaurs and dinosaurs-matters cards yields just 19 cards. And many of those simply aren’t good.

The aggressive dinosaurs in Red and White aren’t good enough to justify playing them over the Exert creatures from Amonkhet and Hour of Devastation, even if your goal is just playing a dinosaur deck. 2/1s with Haste and 3/1s are severely outclassed by cards like Nef-Crop Entangler and Rhonas’s Stalwart. Tilonalli’s Knight is the best aggressive dino-centric card, but it’s not good enough to carry a deck on its own.

That’s okay, though, because the lack of good, cheap dinosaurs gives us an excuse to go truly jurassic.

Instead of getting aggressive early, we’ll be leaning on the larger dinosaurs in Green and White to go over the top of our opponents.

Our dinosaur curve will start at 4 mana, with Looming Altisaur and Grazing Whiptail. Both of these creatures serve as fine roadblocks against aggressive decks, and Whiptail can even block fliers to boot.

To make sure we get these big-butted dinos out as quickly as possible, we’ll include some ramp and cost reduction effects. Druid of the Cowl is the best mana-dork in Ixalan Standard Pauper, and Kinjalli’s Caller reduces the cost of all our big monsters. Both can also block acceptably, though they’ll struggle against those Exert creatures I mentioned above.

We’ll keep ourselves alive in the early game by including Compulsory Rest and Impeccable Timing. These cards can actually answer Exert creatures and clear the way for our larger, aggressive dinos late in the game.

Add in some lands, and we get a deck that looks something like this:

Because this deck isn’t especially synergistic, we get to play some of the best cards from throughout the Standard Pauper card pool alongside our dinosaurs. Kaladesh– and Amonkhet-block cards help us ramp up our mana and remove opposing threats, while our sweet, feathery beasts finish opponents off.

I’ll likely create one more Standard Pauper deck this season, to make it easier to convince my wife and/or co-workers to battle against my dinos. If that deck’s exciting enough, I’ll write about it here. But next time, we’ll be talking about Commander, and what happens when one of your decks just doesn’t have that fire anymore.