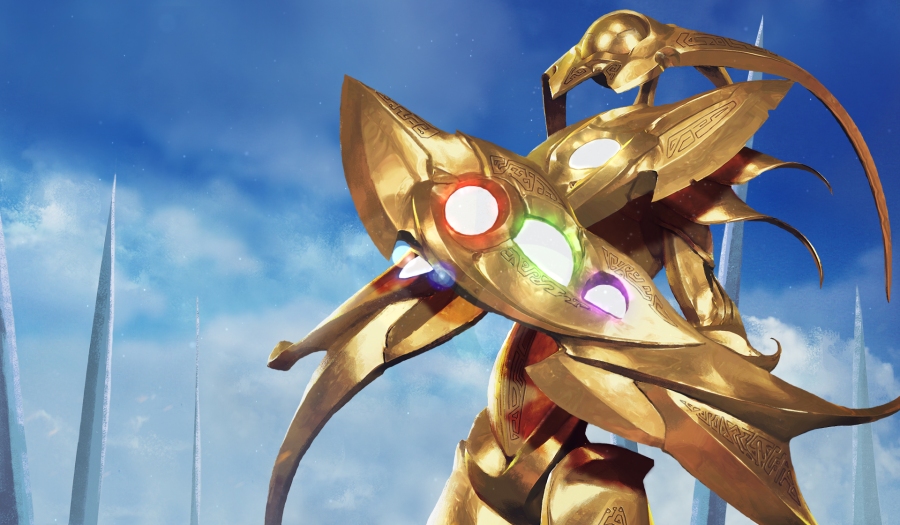 You might’ve noticed that, recently, this blog’s been pretty much all Modern, all the time. That’s because Modern Magic is in a great place right now. In fact, I’d go as far as to say Modern is currently Magic’s best format, and there are five pretty specific reasons why.

Read on to learn why, if you’re playing Magic, you should be playing Modern.

When I started playing Modern, I bought in to Living End because it was cheap, unique, and easy to play. But being a Blue player at heart, I quickly looked for a deck that utilized my Remands. Enter Mono-U Tron.

Since then, I’ve played Izzet Delver, Mono-Green Aggro, Grixis Delver, Esper Gifts Ungiven, Blue Moon, and Grixis Death’s Shadow. And I’ve battled against more archetypes than I can remember, everything from Soul Sisters to Mill to Mono-Black Panharmonicon.

Modern’s greatest strength is its Wild West atmosphere. In Modern, you can play whatever deck you want, as long as it’s powerful.

Look at this full archetype list from MTGGoldfish. Pilots are milling themselves with Hedron Crabs, slamming Slivers, taking all the turns, and reanimating Ionas. No matter how you play Magic, Modern has a deck for you.

All those different decks and strategies make Modern home to Magic’s sweetest matches. Sure, every once in a while you get an uninteractive stinker of a game, where two decks attempt to breeze past each other on different axes. But for the most part, current Modern decks are doing fun, interactive things that lead to cool matches and sweet plays.

As an example, take a look at this match from the recent SCG Charlotte tournament. Emma Handy takes herself down to 8 life on turn 2, and things only get crazier from there. But you’ll also see Thoughtseize interacting with the opponent’s hand, Walking Ballista acting as a pseudo-Fireball, and lots of other meaningful decision points. This is mano-a-mano street brawl Magic, which is the best kind of Magic.

At the local level, matches are mostly the same. Lots of pilots play “top-level decks,” but a ton of Planeswalkers just play whatever’s fun for them. In just a few FNM-style tournaments, you’ll likely get to test your mettle against a variety of aggro, combo, midrange, and control decks, with an opportunity to outmaneuver your opponent in each match.

With so much going on, you might think Modern’s a hard format to get a hold of. In some sense, you’re right, but that’s also part of Modern’s charm. Because Modern has so much going on, the format rewards players who know their own deck and its match-ups intimately. Your ability to succeed directly correlates to how often you play, not just whether you have the “best” deck.

At first, this concept can be daunting. After all, when you sit down at your Friendly Local Game Store and shuffle up for your first Modern match, you might never have played your deck before. That’s completely fine. Expect to lose for a bit, as you get to know your deck and your local metagame. Losing is completely fine.

But if you stick with your deck and adjust for those around you, you’ll eventually turn a corner. You’ll see an opponent play a turn 1 Urza’s Mine into an Expedition Map and think, “OK, I need to hold up Stubborn Denial to counter a Chalice for 1, instead of just jamming my Serum Visions.”

You’ll cheer when someone pilots a similar deck to a Top 8 finish at a Grand Prix. You’ll celebrate when you find new tech that breaks your deck wide-open. And most of all, you’ll start winning, because you’ll know how YOUR DECK specifically interacts with the format. That’s when Modern is at its best.

While Wizards of the Coast hasn’t ever published actual “player per format” numbers (or if they have, I couldn’t find them), I can tell you that locally, Modern is kicking ass. My store’s Tuesday night attendance has risen from the high teens to the low 30s, and Crazy Squirrel Game Store is also adding a second weekly Modern event on Fridays. Local PPTQs fire with a large number of players, and newbies are buying Modern staples to invest in the format.

Globally, Modern’s also on the rise. In 2018, Modern will be back on the Magic Pro Tour, meaning the game’s best players will play the format on Magic’s biggest stage. There are also a decent amount of Modern Grand Prixes coming, and StarCityGames’s circuit continues to support the format. 2018’s shaping up to be a big year for Modern, and hopefully the years following will be even bigger.

“If you like your deck, you can keep it.” For the most part, that’s Modern’s promise. While I (and many other players) have had to jump decks before thanks to bannings, most cards have retained their place in the format. Currently, Modern’s relatively stable, there are no bans incoming, and you can expect reprints to help build your collection and foster format growth.

If I couldn’t cast Lightning Bolts, I wouldn’t play Magic. And while I don’t have to deal 3 damage for one Red Mana in every game I play, I rest easier knowing the opportunity exists in Modern. Most players have a favorite card or a favorite deck. For most players, that card or deck is Modern-legal. As reprints drive the barrier to entry down (unlike in Legacy), and the number of players in the format drives Modern’s popularity up, I’d expect most semi-competitive Magic players to own some sort of Modern deck, if only because they know the format will be around and available forever.

Eventually, Wizards will create a “Post-Modern” format. But that format won’t include the decks Modern players have been shuffling up for years, and it’s not going to magically draw dedicated Modern players away from a format they already love. Modern’s now firmly entrenched in Magic: the Gathering, meaning you’ll get to play your Modern deck forever.

There you have it: the top 5 reasons you should be playing Modern Magic. Hopefully, I’ve sold you on the format’s merits. Modern’s full of sweet decks, intricate plays, and knowledgeable players, all of which makes it by far my favorite tournament Magic format.

Check back here in two weeks, when we take another trip to the ReCycling Bin.

One thought on “Top 5 Reasons YOU Should Be Playing Modern”