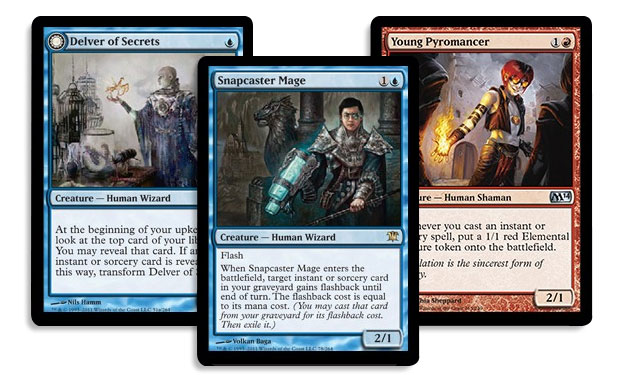 *The word proof is a hyperbolic overstatement. You should keep reading anyways, though.

After a big life change, it’s often nice to get back to your roots. That’s what I did last week, when I took my U/R Delver deck out to jam some Modern games. Why U/R and not Grixis? How’d the deck perform? And is Condescend any good or the absolute worst?

Read on to find out!

Before we get into how my evening of battling with Delvers and Pyromancers went, here’s why I chose the deck:

For those reasons, plus the fact that I just wanted to, I sleeved up U/R Delver to take a run at Tuesday night Modern. I started off by battling against my last opponent from the previous week, who I knew was playing a deck that would give me a rough time…

Round 1: Vs. Abzan Midrange

U/R Delver struggles against Abzan. Their Lingering Souls tokens are very good at blocking Delvers and Vendilion Clique, and Siege Rhino is a house if you can’t counter it. That said, if you can navigate around those two cards, as well as the manlands, you can definitely take down the match.

Game 1 broke my way, as I drew enough Condescends and Electrolyzes to keep my opponent’s flying Spirit tokens at bay, and I was able to dodge Siege Rhino for most of the game. My opponent resolved a Rhino late and went up 3 life, but that left him open to an attack from my Vendilion Clique.

On his next turn, my opponent cast the back half of a Lingering Souls from his graveyard. Then he passed, feeling safe with two flying blockers.

Thankfully, I had a hand of Vapor Snag, Vapor Snag, Lightning Bolt, which was just enough to let me remove the two Souls, swing for 3 damage with Clique, and throw a Bolt at my opponent’s face for the win.

Game 2, however, did not go so hot. I sided out some number of:

And I brought in:

In this game, my opponent played around Condescend very well, which matched up very poorly with my hand. This was how I began to figure out that Condescend is an absolutely miserable card when you go second.

The opponent eventually swarmed the board with Souls and, outside of a very awkward Engineered Explosives, I was unable to answer them. I also misplayed a little bit with one of my Snapcasters, which sealed the deal.

Near the end of this game, I debated between holding or playing a late Blood Moon. Eventually, I decided to play it, thinking that I was still in the game and playing the card would help my chances to win. Also, I figured that Blood Moon would not have been much of a surprise out of my deck. My opponent was a little surprised by it, so maybe I should’ve held it.

Thankfully, Game 3 went about as well as you could draw it up. My opponent Inquisition’d me and took a Blood Moon, which left me with enough threats and counterspells to put on some early pressure.

The game did stall out, as games against Abzan tend to do, but I was able to dig for a Blood Moon and then a Bedlam Reveler to mop things up. Reveler continues to shine in these “3 color midrange” match-ups, as a backup threat who also draws you three new cards.

One more interesting note from this game: I was playing on auto-pilot as we went into extra turns, and some of the guys at the shop pointed out a late situation involving Dromoka’s Command, Shambling Vent, and my own Electrolyze that I goofed up.

I had for some reason forgotten that “fight” means each creature deals damage to the other, and so thought my Electrolyze wouldn’t be enough to kill the Shambling Vent as it fought my Young Pyromancer. My opponent ended up gaining a bunch of life off of my mistake, but just doming him with the Electrolyze and running Blood Moon in next turn ended up working out anyhow.

Round 2: Vs. Grixis Shadow

This match was fairly straightforward, and both games seemed close.

In Game 1, my opponent went down to 1 life, and I had a Burst Lightning in hand that I thought was going to seal the deal. The opponent proceeded to Stubbornly Deny my Burst Lightning. Then, he committed Snapcasters targeting Stubborn Denial at the start of each of my turns, which allowed him to both add pressure to the board and make sure he didn’t die.

We then went into sideboarding, where I realized I really don’t have much to help out in this match-up.

Engineered Explosives is okay, but only gets Death’s Shadows. Blood Moon seemed good, but the opponent ended up fetching around it really well in Game 2, so it likely wouldn’t have done anything even if I’d drawn it. Relic of Progenitus is alright, but I figured it might be too slow to be worth bringing in. In retrospect, I think I should’ve tried it.

I ended up cutting my Condescends, which seemed very slow against this deck of mostly 1-drops, and bringing in Dispel and Blood Moon. If I had Mana Leaks, I might’ve brought in Surgical Extraction, to snipe the remaining copies of any threats that I managed to counter.

As is, my opponent got me real good in Game 2. The weirdest play I had to make in this game was “wasting” a Dispel against my opponent’s Surgical Extraction, which had targeted a Sleight of Hand in my graveyard. I had two more Sleights in my hand and couldn’t afford to lose them. But I knew that using the Dispel didn’t mean anything good for me either.

I want to play this match-up again sometime in the future, because it’s really interesting and I think there’s a way to figure out how to win it. But for now…

Round 3: Vs. Midrange Naya Company

This was an interesting deck that hoped to slam as many Knight of the Reliquaries, Voice of Resurgences, and Collected Companies as possible, while using Kessig Wolf Run to power through anything the opponent put in its way.

In Game 1, I was able to counter, kill, or bounce most everything my opponent put down, and I tempo’d him out just in time. Both Voice of Resurgence and Knight of the Reliquary gave me a scare, but I thankfully drew enough Spell Snares and Vapor Snags to keep them at bay. Condescend caught a late Collected Company, and that pretty much put this one in the bag.

Game 2 was a little more interesting. I brought out Condescend and brought in:

The early turns went about as well as could be expected, with one minor hitch. A Magma Spray caught a Voice of Resurgence, and a Dispel caught a Company, which was fantastic for me. But between those two things, my opponent played a Magus of the Moon.

At first, I thought that the Magus must be good for me. After all, I had brought in my own Blood Moons, to shut down Wolf Run and manlands.

Almost every card in my hand was blue. I had the ability to grab one basic Island from my deck before all of my future fetchlands would be turned off.

So I countered the Magus, figuring I needed more time before all of my non-basics turned to Mountains. It felt really, really weird, but it was definitely the right choice.

On the last relevant turn, I gave my opponent a chance to kill me from 15 life, betting that he couldn’t do it. If he couldn’t, I would definitely win on the next turn. He got up to 13 damage, using some Knight of the Reliquary tricks and Kessig Wolf Run, so maybe I’ll have to be more careful about doing that in the future…

But eh, play loose, get rewarded.

We’re creeping towards 2,000 words at this point, so I’ll keep this one brief. It was an interesting match, though.

Game 1 was the absolute silliest. On turn 1, I played a Delver of Secrets, who is the best Delver ever, because he flipped immediately on turn 2.

On my opponent’s turn 2, he played a Chalice of the Void set on 1, which turns off literally half of my deck.

In response, I threw a Lightning Bolt at my opponent’s face (figuratively, obviously), which was the only thing I could do.

However, after that Chalice, my opponent never played a real threat. And he was never able to kill my Delver. So I somehow won the game. Which was surprising to everyone, and most of all me.

And I brought in:

The Sprays were a bit of a gamble, since they really only kill Matter Reshapers and Walking Ballistas, but I figured they were better than the Burst Lightnings. And if I Blood Moon’d my opponent properly, Ballista would be the card my opponent was most likely to resolve.

Magma Spray did its job, by killing a Reshaper, but I never found a Blood Moon. I barely found a second land. My opponent killed my early Young Pyromancer, and I did not have any good answers for double Reality Smashers. So I lost Game 2 handily.

For Game 3, I put the Condescends back in and cut the Sprays and a Spell Snare, I think. A turn 3 Blood Moon slowed my opponent down immensely, though he was able to grab his 1 basic Wastes to keep casting spells.

But taking the turn off to grab that Wastes put me in the driver’s seat for the rest of the game. My opponent got stuck on four lands for a very long time and could cast only one spell per turn. Some of those spells walked into Condescends, some of them walked into Electrolyzes (looking at you, Walking Ballista). I ended up drawing enough threats to put it away from there.

Blood Moon is still very good, and Condescend probably isn’t. When Condy worked well, it was wonderful. It both countered the opponent’s spell and flipped my Delver, or found me the last Bolt I needed. And in some games, I did Condescend for X = 4 or 5, which I wouldn’t have been able to do with Mana Leak.

But when an opponent was able to play around or through Condy, the card looked miserable. There were plenty of times where Mana Leak would’ve countered a thing, but Condescend didn’t.

So there’s a chance the card stays in the deck, but not a very high chance. I also need to work on my sideboard, as I found myself boarding really inefficiently. I had leftover cards for some match-ups, and I didn’t have anything that seemed good in others. Tweaking the sideboard is going to be my primary focus before I run the deck back next week.

My next post probably won’t be as detailed as this one (tournament reports are a bear to write well), but it’ll likely be a follow-up on how U/R Delver is faring here in Fresno. That is, unless I get myself to actually sit down and try a Magic Duels stream before then…

‘Til then, may your pet deck bring you success!