Call me a hipster, or an old fart, or whatever, but I want Wizards to stop making Commanders that explicitly reference or rely on the rules of Commander.

I started playing Commander about 5 years ago. This was right after Wizards had released their very first set of Commander decks. My friends and I started out by building decks on Cockatrice, trying a whole bunch of different things. We dug through Gatherer, searching for cool Legendary Creatures that spoke to us. I first found Zur the Enchanter (too busted), then Sen Triplets (too feel bad), then Savra (who I wrote about at length here).

The coolest part of finding and building around these creatures was that it took work to make them awesome in Commander. A little less so with Zur, sure, but each creature that resonated with me did so because it had a unique ability that was made even more unique by getting to craft a 100-card, singleton deck around it. I got to pack my Zur deck with 40 or so of the best enchantments in Magic. I got to set my Sen Triplets deck up to take control of my opponents’ whole boards or hands. And I got to leverage Savra’s unique wording to take out multiple creatures at once.

Finding these hidden gems and seeing what you can do with them, what you can build, is an integral part of Commander. Getting to find a niche for your favorite weird cards, and especially your favorite weird Legendary creatures, regardless of the fact that they might not be the absolute strongest, is part of what makes the format so appealing. Commander decks, and Commanders themselves, aren’t typically supposed to be straightforward or dominantly powerful. They’re supposed to be interesting.

Which is what makes it so irritating that Wizards keeps printing stuff like this:

These Commanders are really good. They are really flashy and really powerful. I can see, as a designer, how you could think they’d be a good idea.

But, in practice, these Commanders are really boring, because it’s really hard to interact with them. And Commander is a format that’s entirely about interacting with your opponents, both socially and on the board.

To illustrate my point, let me tell you a story. I was at a friend’s house for a gaming weekend, and we were playing some Commander. Just to see how the change would feel, I decided to put Meren at the head of my Savra deck. We got into the game a bit, and I explained how experience counters work, and that there was no way to remove them. And then I started recurring Eternal Witnesses, then Solemn Simulacrums, and then Grave Titans, every turn. And there wasn’t very much my opponents could do about it, because I could just continually recast Meren and start getting the same value again. The deck was suddenly too strong.

So stuff like that is the worst case of what can happen when Wizards messes around in the Command Zone, by printing Commanders that directly interact with the rules of the format in ways that other players can’t counteract. But that doesn’t even account for the fact that Wizards is using these “unique” Commander-specific designs in place of other designs that could lead to more interesting decks.

Case in point, let’s look at this year’s Commander product, and the 4-color Commanders vs. the “Partner” mechanic. 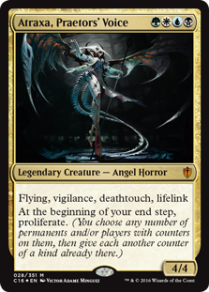 When I read that Wizards was going to print 4-color Commander decks this year, I was pretty excited. I assumed we’d get some cool Gold cards, with each color represented, and also some sort of hybrid mana creatures with different costs and activated abilities. Or maybe even something cooler, something that I hadn’t thought of.

Well, we did get the Gold cards, and we did get something I hadn’t thought of, but I don’t know that the thing I hadn’t thought of was cooler. Instead, we got Partner, which allows you to pair two Legendary creatures together and put them at the head of the same Commander deck. Which might be cool if the Partner creatures were actually designed, thematically and flavorfully, to be partners. Instead, they’re a bunch of random story characters who wouldn’t typically be working together. And while the combinations allow you to build a lot of potentially interesting decks, they feel a little pre-set. They also feel like they’re bending the flavor of what being a Commander is about. Partner is a gimmick in the same way that Devoid was a gimmick; it feels tacked on because there was a design problem that couldn’t be solved.

The Gold cards, on the other hand, are very cool, unique designs. And I realize it was hard to make even those five 4-color Legendary creatures, but darn it, it would’ve been nice to have a couple more of them, instead of another mechanic that messes around with the Command Zone and bends the format even more. I want Wizards to stop trying to redefine what a Commander is, via new mechanics, and instead print interesting Legendary creatures that just happen to be good Commanders.

But if you disagree with me, go ahead and play your weird, format-specific Commanders, I guess. Because ultimately, Commander’s kind of about playing what you want, as long as you and your playgroup are having fun.

One thought on “Wizards, Please Stop Messing Around in the Command Zone”