Even when they shouldn’t, some men just want to watch the world burn. 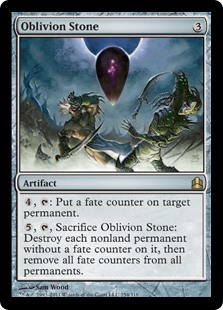 It’s been a long day, but it’s also been a good one. Because you’re here now, sitting across from one of your best friends, pitting two champions of Commander against each other.

It’s Commander, we use the cards that speak to us.

You know the match-up. You practically built both decks. You built yours recently. You put a decent amount of testing and money into it. You know the deck’s not perfect, but it’s powerful, and it’s very you.

Your friend’s was built a couple years ago, at an apartment you shared. Three of you lived there, together, and the three of you built the deck, together. You huddled around the computer in the apartment’s cramped corner room, pulling cards up on Gatherer, arguing for and against the cute interactions you each liked, crafting the mana base.

Both decks are “level-up” decks. Decks that were built because the owners wanted something powerful that spoke to them. This will be a good game.

You know that if the game goes late, you’re likely going to get out-valued. Your friend simply plays more powerful creatures than you do, and his Commander is easier to abuse, provided he can stay on the field. You know that your best chance is to either a) out-value your friend very early, such that he can’t come back from it or b) dig into one of your early combos and just finish the game before things really get going.

But somewhere along the way, you convince yourself that you have the answers if the game goes long. You draw an Oblivion Stone, and then search for an Academy Ruins, and you tell yourself that you can take some damage, you can play a little slowly. You have the board locked down. The only thing you can lose to is an entwined Tooth and Nail, you figure, and you can’t lose to that if you have Oblivion Stone ready to go in perpetuity.

This is a stupid plan. You of twenty minutes ago could have told you this was a stupid plan. But you’re tired, and you’re locked in, and you forego a lot of more aggressive, and likely better, plays to just keep drawing and holding up that stupid Oblivion Stone.

To be fair, it almost gets the job done. But you took too much damage early, and you waited too long to play your cards, and now they’re all out of order and you’re just playing them because you have to, when earlier you could’ve gotten some synergy out of them.